Hello hello my blogger friends! Happy St. Pat's to you today! My girls are off to school wearing their greens, and I've got my olive green pants on today- no pinching!

today I sat down to create with some of the new gorgeous Pink Paislee line intending to create a couple St. Pat's cards, but alas, none appeared. Instead my vintage side showed up and I created this glittery, shabby, textural cards instead.

All my cards I created with scraps using the Pink Paislee Butterfly garden collection. I'd already used that on my foot stool I shared last week. I didn't want to waste any, and what's great is that I have very little left over scraps now. BONUS!!

First, I cut this card base down a bit, then I added both a block of the light pink and a block of the blue papers, I tacked on a border in white punched with my EKSuccess punch. Then I started with the angel block, I inked the edges of that, added a mat of gray, deco scissors the edge and inked it as well. I added another block of cream, then added ink to that edge. Finally I added some cream felt cut with pinking shears. I adhered the block on with my GA Extreme Adhesive Squares. I looped some of my crinkled seam binding ribbon in a double bow, tied with a shell button. I added that to the card, along with a petalloo flower topped with a white prima rose, then I added a berry stem in white. I also glittered two raw chipboard stars and added them to the side of the block.
Lastly I stamped the Hero Arts greeting on a scrap, cut the corners with my mini scallop scissors and popped it up on some UcutIt foam from Glue Arts. 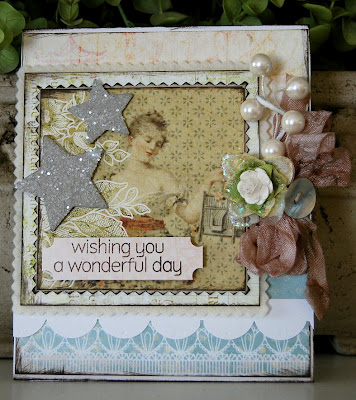 This card used a square base, then I added the block of blue, and added the gray mat cut with pinking shears. I added a cut out medallion, then topped that with a strip I cut the edges on with pinking shears. I inked all the edges, then added the bracket frame with glitter. I then inked an old tag, and added that to the card using UCutIt foam, topped with a gcd studios button and twine bow. I glittered this Tim Holtz grungeboard crown, and added that overtop the stamped sentiment and added a little flower to the center.
I used my crinkled seam binding ribbon, basted the edge and created my flower, cutting out several leaves and added a gem brad center. The greeting is a Hero arts stamp.
I also created a few decorative pins and added them to the flower as well. 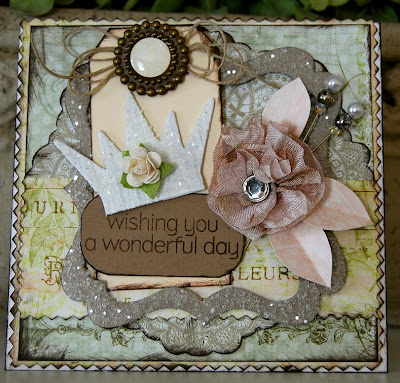 For this card, I first added the block of paper, then added the strip to the right side, I then cut the edges of the card with my deco scissors. I also inked the edges of the card.
then I added this block of kraft, adding the mat with deco cut edge. I traced in brown around the edges of the card. I then added the butterfly block and the inked tag, I added a cut piece of felt to the tag and a cut border strip. Next I created my rose with my crinkled seam binding, and I added two green flowers to each side as leaves. I tied a bow with my seam binding, and added a shell button and two decorative pins. I also added in a glittered raw chipboard star.Finally I added a brad pearl to the center of my seam binding flower. 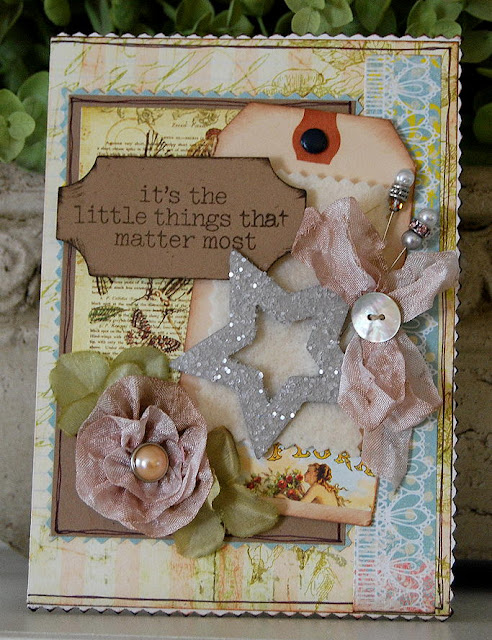 For my last vintagey card, I added the block to the card base, then added the punched scallop border. also inked. I took two tags, and added them, then trimmed the edge of the fairy block and inked again. I added a glittered square on top of the fairy and then stamped Get Well from TCP studios on the other tag. I added a couple Petalloo flowers to the card, including a bow of twine on the larger tag, then again I tied a bow wiht my seam binding and tied it with a peachy button and twine. 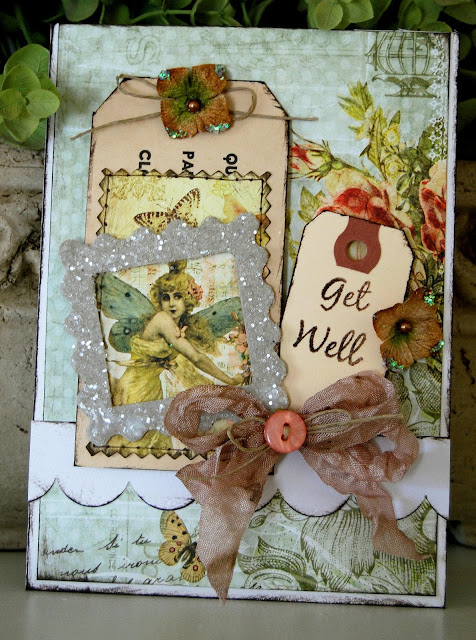 I hope you have a wonderful St. Patrick's Day!
Luck of the Irish to Ya!

Posted by Kristen Swain at 1:42 PM

Definately not St. Pats, but absolutely gorgeous none the less.

Those are so very beautiful! Love the vintage look - and I'm not usually a vintage-y girl!

These are absolutely stunning!!!

Wow what gorgeous cards. Love the soft, vintage feel to all of them