It doesn't get much easier

or more delicious then fresh cinnamon rolls- but wait - these are NOT Cinnamon Rolls!!
they are cinnamon biscuits!!!! and they were so easy to make!
I was really wanting to bake yesterday - but was out of yeast- not feeling like running to the store- I searched instead for a scone recipe- but was rewarded with this yummy sounding recipe from All Recipes, in their biscuits section. They were called Cinnamon Sugar Fan Biscuits- but someone suggested rolling them like pinwheels instead of the fan shape, so I did that- and added a yummy glaze to the top as well. BY FAR these were so simple- I made a second double batch for hubby to take to work. 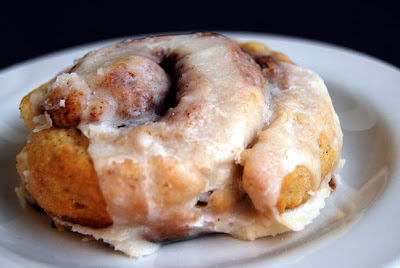 mix everything except shortening and milk in large bowl, then cut in shortening with pastry cutter until mix resembles coarse crumbs, add milk, stirring until just moistened. turn onto lightly floured surface and knead about 10 times, pat or roll out into large rectangle.

1/2 cup butter, 1/2 cup cinnamon sugar. ( this can be more or less depending on how much filling you want- of course I added more! LOL!)

smear butter onto dough, then top with cinnamon sugar- roll longsides into large roll, then cut into 1/2 inch to 1 inch pieces- the thick you make them the bigger they end up. I squished them down a little flatter with my palm.

cool slightly and make glaze to top them

glaze- 1/2 stick butter, 2 cups confectioner sugar, and a drizzle of leftover coffee. ( you can use milk or maple syrup or orange juice- etc...)

mix sugar and butter together, then add liquid to reach the consistency you like, drizzle over warm rolls.

Eat fresh- with lots of fresh coffee! hope you enjoy this recipe!

Posted by Kristen Swain at 7:19 AM

they look like cinnabon rolls, just smaller!! yummy- since I am bored already with the kiddos in school, I may have to make some of these!!!

You know, if we lived closer, I think we would make great friends, but if we were, I'd be as big as a house. You serve way too much yummy goodness out of your kitchen!