hello hello- I have missed you all! I get so sad when I have nothing new to post to share with you. So i have spent a little time making some new cards to share with you.
Over the weekend I checked out a Tues. Morning store and was able to get a couple new scrap items to play with.
This card uses several of the new things. First I have these beautiful damask clear backing stickers from Heidi Swapp- I got a huge roll of them- probably over 50 stickers for $1.99. I used two white ones on my scrap cardstock for the background of my card.
I then layered on a scrap of corrugated cardboard- you know I love this stuff, and it's a green embellishment.
Topping the cardboard is a Tim Holtz grungeboard keyhole that I bought in a double package for a decent deal. I painted it- then glittered with clear glitter.
I added a flower, some twine and button, then topped with a K&Co rubon heart. The words are from Scenic Route and I finished the card with a double punched Fiskars lace border punch. 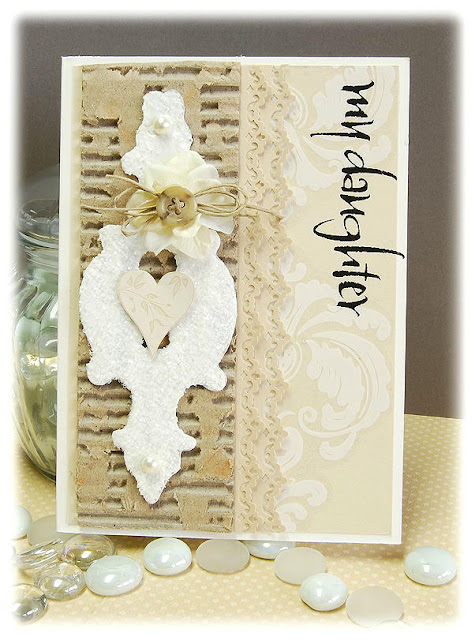 Here is another card using Bobunny dot cardstock with the HS damask stickers. They are really beautiful. I added a scrap strip of handmade paper in sage to the side, and added some Bobunny dot ribbon. More Tim Holtz gungeboard circles across the card. These I painted, then inked well and removed some of the ink off the embossing with a baby wipe before it dried. I added a couple pins, a flower with an Anna Griffin epoxy flower and rubons for the greeting from Making Memories. 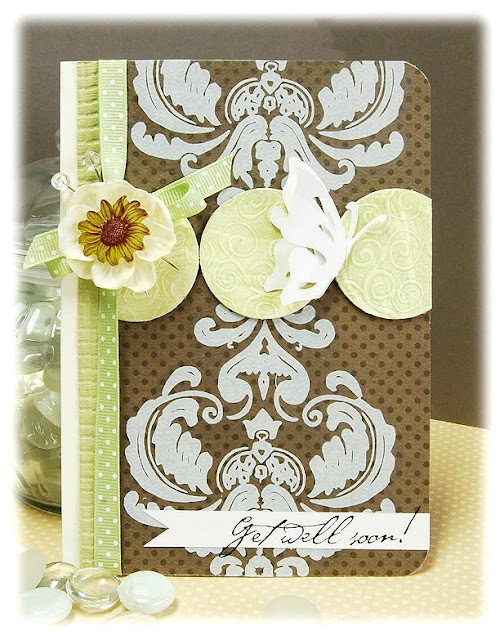 Next are more of the TH grunge circles, this time, I lightly inked just across the embossing to add the color. The ribbon is easter clearance from Joanne's. I added a bit of corrugated cardstock- don't know who made that, had it forever! And a bit of scalloped border from MM. I added a couple white buttons with purple floss and a rubon from MM to finish. 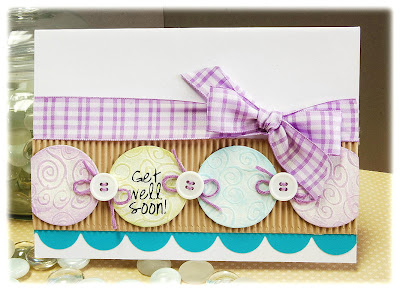 I was all over the place with creating today, when I pulled out this butterfly, and saw this Bobunny halloween sticker, I thought how cute it might be on a punky teen kind of card.
So I added glitter to the Reminisce cutout butterfly, the bobunny sticker, which I added gems to the eyes. I used more of the corrugate tan paper for the backing. Then I added my MM border in red, to the BB black scallop I turned upside down. Between them is some black rickrack. I handcut stars for the edges, cutting off the extra. The letters are colorbok and I added a button to the O. 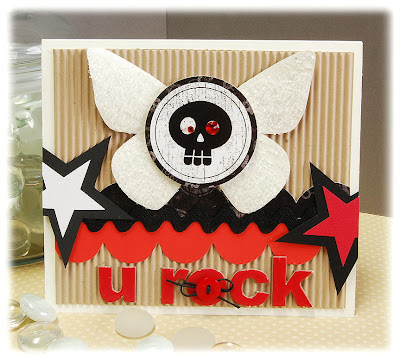 I was in need of a baby card to send to a fellow DT member so I created this sweet card. For the flowers and the elephants, I used Kim Hughes stamps from Cornish Heritage Farms. The inks are Martha Stewart. I used the stamps to create the background, and added in kraft cardstock, and put on the borders with some handmade paper. I used a couple buttons on the background. After I stamped the greeting, I added a couple gems to it , then added some teeny tiny gems to the flower centers. 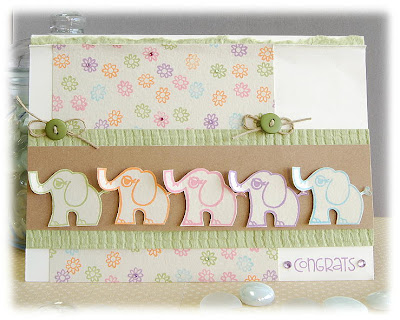 Now, you know I share most of my cards, typically I like them , and when I don't- I let you know. Because, we all have different tastes and even though I created it, it may not be what I envisioned for my end result. After a certain point, I give up trying to remake the card into something I like- and just leave it. So I have two cards to share with you that this has happened to me.
This card, I  had envisioned a folder type card with the faux button loop closure with a large flower bunch and some nice greeting. I got that result, but didn't care for it. After messing and rearranging- I gave in and just decided that I wasn't going to like it no matter what. Papers are bobunny with a basic grey bracket. I fussy cut the flowers out, adding in faux stitching and a hambly acrylic swirl. I printed my greeting and added two hand cut leaves. Next, this card was what I thought was a clever use for these super sized buttons.
yeah.. clever.. hunh.
well, I didn't like the big tree made with the buttons, I even cut out around them with a piece of cardstock I layered under them. It was still too plain, so I added the red buttons- decided I wanted a heart and added that in as well. I put them on some Reminisce wood grain paper, adding this large tag with button. I hand cut the tree base with bobunny double dot brown, and added the letters from reminisce for the greeting. I just don't love it- but don't hate it enough to just toss it either. 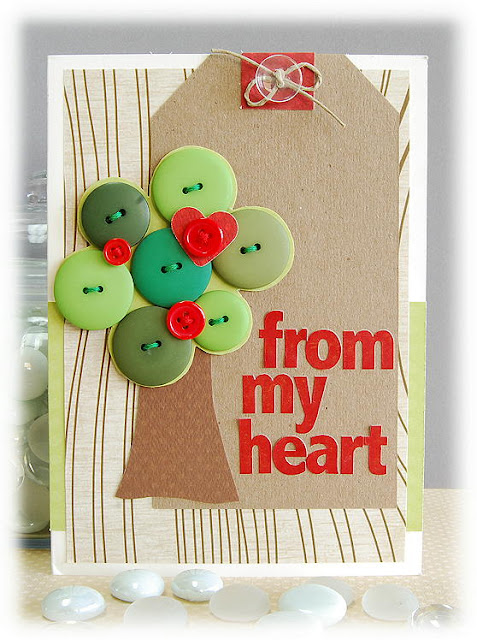 I'm very glad that you have stopped in today- I hope you like my ragtag mix of cards and hopefully you have seen something that inspires you to create with your scraps!
kris
Posted by Kristen Swain at 4:55 PM

Hi Kristin!
Where oh where did you get those Heidi Grace stickers??? I would LOVE some of them!!!
(Also LOVE your tree with the buttons... super cute!)
Thanks for sharing!
-Lindsay/ucophotogirl@hotmail.com

love the cards! the TH projects are fab!!! i really like the bobunny sunflower card- don't know why you don't like-----as always fun projects to see and CASE

That first card is stunning! So elegant!

Wish my "good" cards looked as good as your "crappy" cards...these are great! I think you're too hard on yourself!